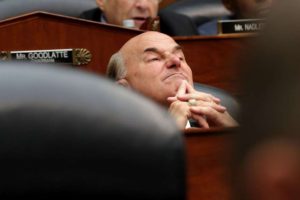 The East Texas member of Congress decided to do something few members of Congress have done. He accused a witness before a committee who had taken an oath to tell the truth of being a liar. The witness was Peter Strzok, the FBI agent who the House Operations Committee grilled for hours over his role in the Robert Mueller investigation into the Donald Trump presidential campaign.

Gohmert, a Republican, violated a rule of the House. Members are not allowed to question the veracity of witnesses who swear an oath to tell the truth. He did so anyway. To his great shame.

Gohmert then decided to wonder whether Strzok was truthful when he looked his wife in the eye while denying an affair he was having with another FBI agent. That line of questioning brought out howls of protest from Democrats on the committee.

Gohmert’s behavior today stood out in a hearing that was full of disgraceful utterances.

That is really saying something. And none of it is good.

Louie Gohmert is a disgrace to his office.

One thought on “East Texan gives lunacy a bad name”