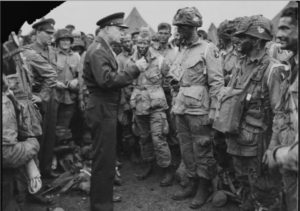 The Greatest Generation generally is defined as millions of American men and women who stood firm against tyranny during an intense, bloody and desperate global conflict.

Meaning no disrespect to those Americans who answered the call for freedom, let me suggest that the Greatest Generation comprised men and women from around the globe.

Seventy-four years ago today, American soldiers — along with Canadian and British comrades in arms — splashed ashore at Normandy, France. They had just completed a harrowing journey across the English Channel to pierce Adolf Hitler’s Fortress Europa.

These brave men endured unspeakable horror. They faced a determined enemy intent on keeping the land they had conquered four years earlier.

The D-Day invasion today stands as the greatest amphibious assault in the history of warfare. Five thousand ships supported the attack. Hundreds of airplanes flew sorties over the Nazi defenses.

What often gets short shrift, though, is the composition of the entire attack force. It was made up of French fighters and Poles. They formed gallant military units after their own countries fell to the Nazi juggernaut. Other nations took part: Denmark, Greece, The Netherlands, Australia, New Zealand all participated in this mammoth endeavor.

It was an international event of the first order.

And I cannot dismiss the bloody fight that was occurring along the Eastern Front as the Red Army marched from the Soviet Union, into Poland, Czechoslovakia and Germany as it sought to rid the world of the tyrant Hitler and his minions.

One final note I want to make: Supreme Allied Commander U.S. Army Gen. Dwight D. Eisenhower was prepared for the worst on D-Day. He drafted an announcement that he never had to make. He would take full responsibility for the failure of the invasion had the international force been unable to secure the beachhead at Normandy.

That, dear reader, is true leadership.

The Greatest Generation, comprising fighters from many nations, ensured success in the weeks and months that followed the titanic assault against the forces of evil.

We owe all of them an eternal debt of thanks.