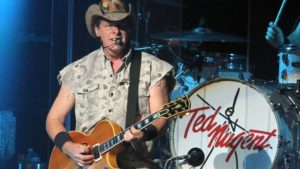 So help me, sweet Mother of God in Heaven, I don’t know why I’m concerned about the blatherings of a washed-up guitarist.

I am, but only for a brief moment.

Ted “Motor City Madman” Nugent went on a radio talk show to blast the daylights out of many of the high school students who have been speaking out against gun violence in the wake of the Parkland, Fla., massacre of 17 students and staff members.

They “have no soul,” said The Nuge. He called them “mushy-brained.”

The U.S. Constitution grants Nugent the right to spew his garbage. It also grants the students the right to speak their minds, too. By my way of thinking, the students are sounding much more intelligent and reasoned than Nugent, an avid outdoorsman and gun-rights-ownership advocate.

He also is prone to making his point in highly offensive manners, such as the time he called President Obama a “sub-human mongrel.”

I did offer a tweet that said Nugent should “just shut the f*** up.” Actually, upon reflection, I think he should keep yapping, yammering and yowling his point of view. It’s better to have the fruitcakes visible and audible so we know where to find them.

One thought on “Motor City Madman pops off yet again”