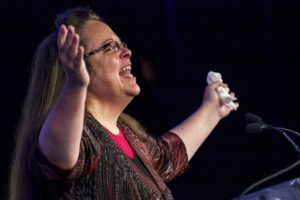 Someone out there has brought back an earlier episode involving politics in the workplace, so I’ll just jump on that horse and ride it briefly here.

Kim Davis is the Rowan County (Ky.) clerk who once defied a U.S. Supreme Court ruling that declared that gay marriage is a protected right under the 14th Amendment to the U.S. Constitution.

She said her religious beliefs wouldn’t permit her to issue marriage license to gay couples. She violated the oath of her office; she had vowed to obey the Constitution and, you know, follow the law of the land.

She brought her personal political beliefs into the workplace. Bad, Kim … bad!

So now there’s some argument being kicked around in social media about those pro football players who are doing that very thing. They’re bringing their politics into their workplace, which happens to be on a field surrounded by tens of thousands of paying fans and millions more of them watching them do their jobs on television.

Some of those players are “taking a knee” when “The Star-Spangled Banner” is sung before games. Others are locking arms with teammates. Critics of this practice say that the athletes are acting inappropriately by politicizing their profession, not to mention that they’re “disrespecting the Constitution,” which I believe is a ludicrous assertion.

I’ll stipulate once more that I am not pleased by the nature of the protests by pro football players. I wish they had found another way to protest against police brutality against African-Americans, which is the initial reason for the protests.

That all said, if it’s OK — in the minds of many Americans — for Kim Davis, who serves the public in a public office, to bring her political beliefs into her workplace, why is it not OK for pro football players to do the same thing?