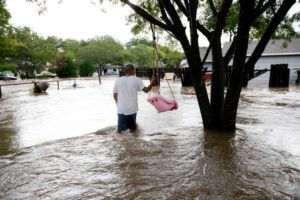 Harvey has stormed ashore again. This time, the storm has savaged my old haunts, my digs. It is hurting more of my friends.

The tropical storm is hitting me where it hurts — in a visceral sort of way.

I don’t know what to do. I might start by sending money to relief agencies that are hard at work trying to lend aid, comfort and safety to the residents of the Golden Triangle.

A career opportunity lured me to the Triangle in the spring of 1984. I spent nearly 11 years working for the Beaumont Enterprise. My family came a few months after I assumed my post. We carved out a good life in a community that seemed to flourish in a universe parallel to the one we left in suburban Portland, Ore.

We made friends for life. They are former colleagues of mine who remain close to my heart. They’re hurting now.

I’ve heard conflicting reports of Beaumont being totally “under water.” The same for Port Arthur, about 20 or so miles south on U.S. Highway 69. Orange — the third city in the Golden Triangle — sits along the Sabine River and it, too, is fending off Harvey’s savagery.

We left a lovely home in Beaumont in January 1995. I got word today from one of my friends — whose home has filled with about 5 feet of water in suburban Lumberton — that my old neighborhood in north Beaumont is likely in “rough shape.” He doesn’t know that with absolute certainty, given that the flood water has limited his mobility. I’ll accept his best guess that our former house is likely inundated.

The president came to Texas to give his support and to pledge the federal government’s commitment to repairing the devastation brought to our state from the Gulf of Mexico. Gov. Greg Abbott has mobilized the Texas National Guard — something on the order of 12,000 troops — and deployed them to assist local first responders.

The stories I’m seeing on TV and reading on the wires are heartbreaking in the extreme.

It was heartbreaking to see the coverage from Corpus Christi, Rockport, Port Lavaca, Aransas Pass and Port Aransas. We have some friends along the Coastal Bend, too, and my heart and prayers go to them.

Ditto for what we saw in Houston, where we have more friends and former colleagues. I spoke with one of them before Harvey delivered its heaviest blow; he talked of moving into the second floor of their home. Then the flood came. I called him back, but I haven’t gotten a response. I pray for the safety of this wonderful family. We have other friends scattered throughout greater Houston who are coping and we worry about them, too.

The Golden Triangle’s suffering is a bit different for us. We know the territory well. We know our way around Beaumont. It shatters my heart to see the damage being done — and to see the grief etched on the faces of the storm’s victims.

Social media have enabled us to keep tabs on many of our friends. But not all of them. I am awaiting news that they’re all OK.

I’m on the verge of shedding tears.