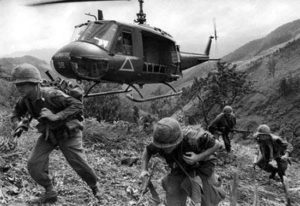 A blog post I wrote noting a preview of an upcoming PBS documentary special on the Vietnam War brings to mind something I’ve told Vietnam veterans for the past 28 years.

They should return to that land, to the place that was so ravaged for decades by war. Vietnamese battled the Japanese during World War II; then they fought the French who tried to re-colonize their country; then came the Americans, who went to Vietnam ostensibly to protect the south against communists invading from the north.

I was one of them who went there in the spring of 1969. The Army sent me there after training me to service OV-1 Mohawk airplanes. They ordered me to Marble Mountain, just south of Da Nang.

After I returned home and eventually separated from the Army, I re-enrolled in college, got married, produced two sons, started my career in journalism and then, in 1989 had the opportunity to return to Vietnam as part of a delegation of editorial writers and editors.

The PBS series that will debut on Sept. 17 contains interviews with many veterans, one of whom comments on how beautiful the country was — and is! He is so correct.

Two decades after serving there, I found a country that had commenced its recovery from all that warfare. It, indeed, is a beautiful land, with beautiful citizens who — even then — welcomed these American journalists with open arms.

I’ve told many vets since that marvelous journey that they should return. Most of them beg off. Too many terrible memories, they tell me. The combat veterans especially seem to want no part of returning there. I tell them candidly that they should go nonetheless. They will find healing in a return there. Indeed, my trip to Vietnam with fellow journalists included several veterans, some of whom saw their share of combat during the war. They, too, felt revived upon returning to that place.

I did, too. I discovered one of the big surprises of my life upon returning to Marble Mountain in 1989. It was that I had been lugging around emotional baggage and I didn’t even know it!

Our government guide — a true-blue communist named Mai — was explaining to me how the Vietnamese were able to absorb all that we had left behind. The building materials, the equipment, even the pierced-steel planking (PSP) upon which we parked our aircraft all was put to use by the Vietnamese, she said.

That’s when I lost it. That is when I shed my emotional baggage.
The PBS documentary produced by acclaimed filmmaker Ken Burns is going to bring much of that home to vets who watch it.

I would urge them all to return to Vietnam if they can. Take my word for it. They will not regret returning.

Get ready for a major history lesson on Vietnam