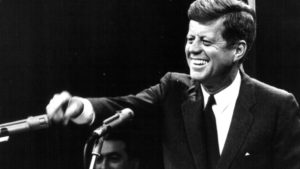 It sounds strange to consider that John F. Kennedy would turn 100 years of age today.

Those of us who are old enough to remember the 35th president of the United States remember him as a young man who, even stranger as it seems, seemingly gets younger the older we all become.

JFK was the youngest man ever elected president in 1960. He was 43; the youngest ever to become president was Theodore Roosevelt, who ascended in 1901 to the highest office at 42 upon the death of President William McKinley.

Less than three years after taking the oath of office, President Kennedy’s life ended as he took a rifle shot on that street in downtown Dallas.

I have resisted the temptation to rank President Kennedy among the greatest who ever held that office. I consider his life to be an unfinished work. I bristle a bit at those surveys that place JFK at or near the top of such lists. How can we measure what he actually accomplished? The truth is we cannot.

I prefer to think of the president in terms of what he might have done. Even that is an exercise in futility because we cannot know with absolute certainty how history would have played out had he served the entire length of his presidency. I’ll presume he would have been re-elected in 1964. Then what? How would the Vietnam War have gone? What would he have done, say, by the end of his second term?

His life is frozen in time. For the president, it ended after just 46 years on Earth.

Still, the man’s legacy remains in large part due to the work done by those who came after him. President Lyndon Johnson’s “war on poverty,” his landmark civil rights legislation and, yes, the tragedy that continued to unfold in Vietnam all are part of JFK’s historical record.

I have trouble even grasping the notion of John F. Kennedy becoming an old man, let alone one who might have lived long enough to celebrate his centennial birthday.

If only he could have finished his marvelous life. JFK will remain, as the song suggests, “forever young.”