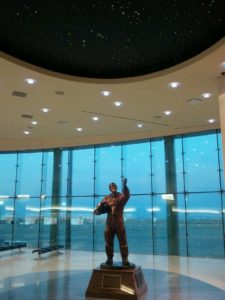 It pays a lot of attention to economic development, fiscal responsibility, accountability to taxpayers and even makes a nod toward improving the appearance of public rights-of-way along our interstate highways.

I didn’t see any mention of Rick Husband Amarillo International Airport. Indeed, I am keeping my copy of an Amarillo Globe-News story that profiled Nelson’s campaign platform; my intent is to remind myself of issues she is addressing and which of them she needs to devote more attention.

I just returned this evening from a quick trip to AMA and noticed a couple of things about the site.

One is that the grounds immediately around the covered parking structures look better than they have looked in recent months. The grass is cut and trimmed. I did notice a number of weeds sprouting through the pavement in the parking lot. Tsk, tsk.

The other thing I continually notice as I drive along Airport Drive is that it, um, is so non-descript. I didn’t notice a “Welcome to Amarillo” sign, or any roadside artwork that depicts the personality of the community travelers are visiting … many for the first time, or perhaps for the only time.

I make the point about AMA for this reason: In the 1990s, the city spent a lot of tax money to subsidize jet traffic provided by American Airlines. The idea of spending Amarillo Economic Development Corporation sales tax revenue on these jet aircraft was to make air travel more comfortable for business travelers. The AEDC subsidy was intended to lure business to Amarillo. It drew its share of criticism from other communities. Frankly, it sounded like so much sour grapes.

I found the strategy to be innovative, aggressive and ambitious. The city ended the subsidy. American Airlines pulled the jets out of its Amarillo-to-D/FW route — for a time. Then the airline brought jet traffic back to AMA, as did United Airlines and Continental; Southwest always flew jets in and out of AMA.

The city once staked a lot of public money on air service at its airport. What’s more, in recent years the city has renovated and remodeled AMA, modernizing the terminal, turning it into an attractive site.

We have a new mayor and an entirely new City Council making policy at City Hall. Our new city manager, Jared Miller, came here from San Marcos with a reputation as someone who emphasized economic development.

I’ll throw this idea out to them all for consideration: How about developing some sort of strategy to make Rick Husband Amarillo International Airport a good bit more inviting to those who come here from the Metroplex, from Houston, Denver, from Las Vegas or from Phoenix?

There might be a business opportunity to be gained for the city if the traveler gets a first-glimpse look at what the city has to offer on his or her way out of the airport.

Just some food for thought, folks.