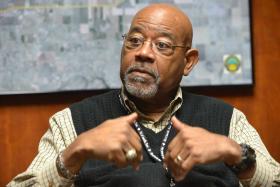 Terry Childers’ sudden departure this week as Amarillo’s interim city manager brings to mind the question that has been nagging at a lot of us around the city.

What’s taking the City Council so long to find a permanent manager?

Childers came on board exactly one year ago after Jarrett Atkinson — Lubbock’s brand new city manager — quit as Amarillo city manager. Childers was seen as a fixer, someone who could repair what supposedly was broken at City Hall.

The council started looking for a permanent manager. Then it stopped looking. Childers would stay on until after next spring’s municipal election, or so it was supposed to go.

Then he popped off one time too many. He called a constituent a “stupid son of a b****.” No can say such a thing, Mr. Manager. You may go now.

So, he did. Childers tendered his resignation and then skedaddled back to Oklahoma City. This brings up a side issue. Childers’ resignation letter mentioned his final day being Dec. 16, but he cleared out his office and left. My understanding is that he’s done … but do we pay him for his final month anyway?

Amarillo ought to be able to attract top-drawer administrative talent. We’re a city on the move. We’ve been in constant growth mode for several decades. We’re in the midst of an extreme makeover downtown. The position pays well, about a quarter-million bucks a year, give or take a few thousand.

Is it the “dysfunction” on the City Council, which Childers himself described some months ago, that keeps quality applicants from seeking this job? It’s reasonable to wonder such a thing, given that the council majority changed dramatically after the May 2015 election.

Amarillo has to get its municipal government structure straightened out. I’ve long believed we’re better than to wallow in the kind of back-biting, sniping, griping and petulance we’ve heard coming from City Hall over the past year or so.

This might be a good time for Mayor Paul Harpole to conduct one of those “rolling quorums” designed to get everyone aboard the same ship. The council cannot meet as a group and talk privately about public issues without violating state open meetings laws.

So, it might be wise for the mayor — who fancies himself as a take-charge guy — to talk to each council member one at a time and persuade each of them that the time has arrived for the five-member choir to start singing from the same hymnal.

A city of 200,000 residents doesn’t run itself. Especially now, with so much work to be finished … and so much more to do.