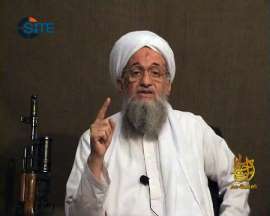 So … you might be asking: How complicated can it get in the Middle East?

You remember those guys, right? They flew the airplanes into the World Trade Center and the Pentagon and launched the current Global War on Terror. We hunted down Osama bin Laden and killed his sorry backside in Pakistan. We’ve been fighting al-Qaeda ever since.

Now we have the Islamic State to contend with. We’ve been taking those monstrous terrorists as well.

Now comes word that al-Qaeda might decide to go after the Islamic State in Syria.

Which of these terror cabals poses the greatest threat to the United States and our allies? Do we take sides?

Here’s a thought. Maybe we ought to just let al-Qaeda do what reports indicate it intends to do. The Shiite terror group might have determined that ISIL — the Sunni monsters — pose a grave threat to them.

The report attached to this blog post suggests al-Qaeda might seek to “compete” with ISIL for supremacy in the dark world of Middle East terrorists. What about, oh, Hezbollah and Hamas? Why not “compete” against them as well?

Of course we’re not going to take sides. Nor should we.

My own hope is that “compete” actually means to “fight,” which means one terror group is going to kill members of the other terror group.

If that’s what transpires, then let ’em fight.