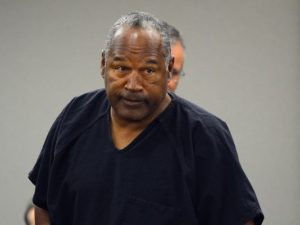 Orenthal James Simpson might be getting out of prison soon.

The Nevada parole board has granted Simpson parole for some of the crimes for which he was sentenced to prison five years ago. He’s going to remain behind bars, though, until he becomes eligible to be paroled for the rest of the crimes.

So, what will he do once he walks out of the slammer?

Here’s a thought: He ought to seek to repay the African-American community that cheered his acquittal in 1995 for the double murder of his former wife and her friend.

Simpson went to prison on charges stemming from an altercation he had in Nevada over some sports memorabilia. I don’t begrudge his becoming eligible for release on those charges.

It’s the double murder and his acquittal of those charges that continue to eat at many millions of Americans.

The jury’s finding of “not guilty” was the result of brilliant defense work by Simpson’s legal team led by the late Johnnie Cochran. That the former football star walked on those charges infuriated most Americans … but cheered a significant minority of Americans, namely, African-Americans who were glad to see Simpson remain free.

More than 20 years later, it remains a fair question to ask: Why cheer this man’s acquittal only on the basis that he, too, is black?

For his entire adult life, there can be no finding of evidence that O.J. Simpson gave back to the community from which he emerged to attain athletic stardom and, to a lesser degree, a level of celebrity as a film actor.

Indeed, I saw something just this weekend about Simpson wanting — get ready for this one — to date Kris Jenner, the former wife of the late Robert Kardashian, another member of Simpson’s superstar legal team.

Eventually, Simpson will walk out of prison. He’ll be free to do whatever he wants — as long as he doesn’t violate the terms of his parole.

He ought to start his road back by giving something to the community that cheered him when — in my view — a jury let him get away with murder.

Then again, he did once vow to look for “the real killers” of Nicole Brown Simpson and Ron Goldman. Is that pledge still on the table?