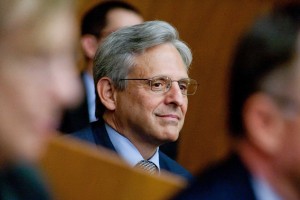 Republican resistance to President Obama’s nomination of Merrick Garland is beginning to show signs of weakening.

Is a mere meeting with two Senate Republicans enough to bring this nomination to the confirmation process? Hardly. The meetings, though, do seem to suggest that Majority Leader Mitch McConnell’s effort to block the nomination is being seen for what it is: a political game of obstruction.

Is it beginning to sink in to some GOP senators that Garland is the best nominee they’re going to get? He’s supremely qualified. He’s a judicial moderate, a studious and thoughtful jurist.

Consider what’s happening out there on the political campaign trail.

GOP frontrunner Donald J. Trump is beginning to implode. He said women should be “punished” for obtaining an abortion, then took it back; he said he wouldn’t “rule out” the use of nuclear weapons against the Islamic State, even saying the same thing about deploying nukes in Europe; his campaign manager is accused of battery against a female reporter.

However, Trump remains the frontrunner for the Republican Party presidential nomination.

Do members of the Senate GOP caucus understand that Trump’s chances of being elected president are vaporizing?

McConnell said Obama shouldn’t get to fill the vacancy created by the death of conservative judicial icon Antonin Scalia. That task should belong to the next president, McConnell said.

And who is that likely to be? I believe it’s going to be Hillary Rodham Clinton.

The GOP-led Senate is now facing the prospect of simultaneous earthquakes. The Democratic presidential nominee could win the White House in a landslide and the Senate could flip back to Democratic control once the votes are counted in November.

Against that backdrop, we’re beginning to hear from an increasing number of Republican senators that, yep, Merrick Garland is as good as we’re going to get.