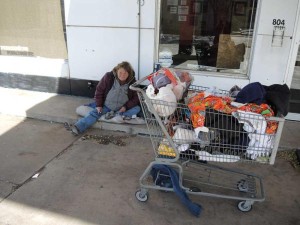 Amarillo, we have a classic conundrum on our hands.

City officials want to “protect the public” by issuing rules restricting where individuals can sleep. Now they find themselves grappling with whether proposed new regulations infringe on the rights of people who have nowhere to go, nowhere to sleep at night — except in public places.

Here’s where City Council members might wish they actually got paid real American money for the job they do to set public policy for a city of 200,000 residents.

The council tabled a proposed ordinance until city legal staff can figure out a way to restrict where folks can sleep at night without taking away the rights of those who live on the street.

It appears that a lingering question concerned how the city defines places that aren’t usually set aside for “human habitation.”

The council then decided against accepting the proposed ordinance.

Mayor Paul Harpole said the purpose of the ordinance is to protect the public and not harm the homeless.

OK, Mr. Mayor. Let’s then try to figure out how to do one thing without doing the other.

From my peanut gallery perch, it appears the city is facing a situation where any controls on where homeless people can sleep at night are necessarily going to inflict some measure of “harm” to those who cannot find shelter. Harpole, incidentally, cast the lone vote against tabling the ordinance.

As NewsChannel 10 reports: “I think a lot of people here are working extremely hard not only to work on this ordinance, but really work on solving some of the root problems of homelessness here in the City of Amarillo,” said James Allen, Community Development Administrator for the City of Amarillo. “I applaud the community for being involved and I want them to stay involved and I think together we will come up with solutions that will address these issues.”

The city cannot let individuals sleep in public parks, or on public sidewalks, or in abandoned buildings. Nor can the city afford to build shelters that will accommodate all the homeless individuals who currently are looking for somewhere — anywhere — to sleep at night.

The issue is coming back to the City Council agenda next week. There might be some tightening of the language to give the proposal some more precision and perhaps seek to protect the city’s homeless population.

For the life of me, I’m trying to understand how any new rules can avoid some discomfort among the people they affect the most.

Good luck, council members. You’ll need lots of it — and some wisdom, too.

2 thoughts on “Whether — and how — to protect homeless folks”