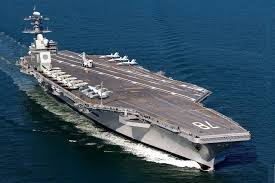 The U.S. Navy is about to commission its latest super warship.

It’s named after the 38th president of the United States, Gerald R. Ford, who served with distinction as a naval officer during World War II.

Why bring it up here?

We keep hearing along the Republican Party presidential primary campaign tour that the current president, Barack Obama, is “gutting” the military. The candidates all talk about having fewer ships, fewer warplanes, fewer ground troops, fewer this and that. We’re defenseless, they suggest, in the face of growing threats around the world.

Well, as President Obama told 2012 GOP nominee Mitt Romney four years ago during a debate, “We have fewer horses and bayonets today” than before, but that doesn’t make us weaker.

To call the USS Gerald Ford a formidable weapon is to commit gross understatement.

More than two decades ago I had the honor of touring another nuclear-powered attack aircraft carrier, the USS Carl Vinson. I was assigned by the paper where I worked to cover a tour of the ship by the late U.S. Rep. Charles Wilson, who invited me to join his delegation. My boss agreed, the paper flew me to San Diego to join Wilson and his delegation for a four-day tour of the Carl Vinson, which was cruising off the California coast.

We saw some amazing displays of skill and professionalism by the deck crews, the combat information center team and, of course, the Navy and Marine pilots.

The skipper, Capt. John Payne, took us on a tour of the flight deck and informed us of this interesting tidbit: A single carrier battle group comprising the aircraft carrier and its normal complement of cruisers, destroyers, frigates and smaller craft, packed as much firepower as all the ordnance dropped in all the combat theaters of World War II.

OK, so we don’t have as many ships as we’ve had, or as many airplanes or ground troops. Does that mean we haven’t invested a lot of money in the defense of this nation? Hardly.

I believe it was President Obama who recently noted that the annual U.S. defense budget is greater than the combined budgets of the next seven nations.

No, folks, we aren’t disarming ourselves.