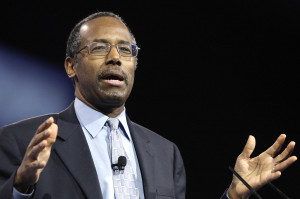 Ben Carson now has weighed in on the matter of religion and politics.

The good doctor’s take: Americans shouldn’t elect a Muslim as president, apparently because he believes the faith isn’t compatible with the U.S. Constitution.

I’m trying to find where in the Constitution it speaks to its compatibility with any religion. The only thing I can determine is that the Constitution — the finished document — is expressly non-religious. It doesn’t condone any religion. Not Christianity, or Judaism, not Islam, not Buddhist, Hindu or Shinto.

Surely, Dr. Carson — one of 16 individuals seeking the Republican presidential nomination — knows this. Doesn’t he?

It’s neutral. Get it? The only reference I can find even to the word “religion” is in Article VI, where it declares “no religious test” shall be given to anyone seeking public office anywhere in the United States of America.

How about we not talk about whether one’s religious faith qualifies — or disqualifies — him or her from serving a nation that comprises people of many faiths?