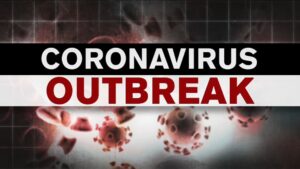 They’re calling our national response to the coronavirus pandemic a fight against an “invisible enemy.”

These questions rise the way they rose when we went to war against international terrorism immediately after 9/11. I have posed the question myself: Will we be able to declare victory in the global war on terror?

If we can eradicate the disease, what will happen to the way we behave, the way we interact with our friends — or even our family, the folks who live elsewhere?

It well might be that this pandemic is going to have lasting — possibly permanent — impact on the way we lead our daily lives.

My wife and I already are wiping down door handles, fuel pumps, shopping carts with antiseptic wipes. We already are washing our hands with far more frequency than before the coronavirus changed the world. We’re keeping our safe “social distance” from those we see in our quiet Princeton, Texas neighborhood.

Is this the way it will be, um, forever? Man, I hope not. Then again, I don’t know when or how we’ll be able to declare an end to this “war against an invisible enemy.” 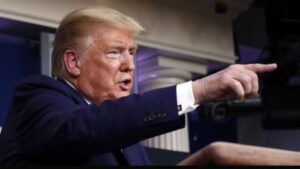 Donald Trump has signed on to what his medical response team has known all along: that the coronavirus pandemic is serious, it is deadly and it deserves an all-hands-on-deck response.

It took far too long for the president to accept what the scientists and medical gurus were telling him. However, his statement today tells me that the warnings he has heard are finally sinking into his thick, and vacuous skull.

Trump said today we can expect a very difficult two-week period ahead. The rate of COVID-19 infections are going to increase, as will the rate of death.

Governors have gotten it. Texas Gov. Greg Abbott has extended the shelter in place directive to the end of April; he also has extended public school closures to May 4. Those dates remain fluid, of course, but at least our state government is taking the kind of proactive approach that — until this moment — has been missing at the federal level of government.

The president now projects 100,000 to 200,000 deaths from the virus. It’s a far cry from what he said not that long ago. It was just in February when Donald Trump said the infection stood at 15 and would vanish all by itself before too long. Hmm. It didn’t happen.

Indeed, it has gotten far worse than the president was letting on.

But … now he is on board with what the experts have told him. Drs. Deborah Birx and Anthony Fauci are stellar infectious disease experts assigned to the task force led by Vice President Mike Pence. They have delivered a grim prognosis.

If only the president had accepted the bad news long before now. At least, though, he has signed on.

This is the face of a 6-year-old pooch. Toby the Puppy turns 6 on April Fool’s Day.

That is no joke, except that there’s more than a little irony that we would celebrate Toby’s birthday on this particular day.

Toby has been part of our family for almost all of the time he has been scampering on the good Earth. He barged into our lives one sunny summer day in Amarillo, Texas. Our great-niece brought him home with her after she found him curled up in an alley not from our home. Our niece was spending some time with us in 2014. There’s a bit of a back story regarding all of this, but you’ve heard it already.

If you’re interested in revisiting the whole story, look here:

The irony of all this is that when we took our puppy to the veterinarian, we asked her how old he is. She looked into his mouth and said, “Five months.” That’s it. The doc knew. We backed it up from Sept. 1 and, lo and behold, it happened to fall right on April 1.

There you have it. The “joke” was on us. Except that Toby the Puppy has been no joke. He’s been an absolute joy. He has made us laugh every single day since the moment he entered our home and captured our hearts.

I have chronicled through this Puppy Tales series of blog posts about how smart he is, how well-behaved he is, how intuitive he is and how my wife and I have had to speak in code in front of him because — and I am quite certain of this — he understands the English language.

I want to extend birthday greetings to our beloved Toby the Puppy. There will be more tales to tell about him.

It’s been a wonderful six years. He has made my wife and me so very happy and I know absolutely without a doubt that he shares his happiness with us.

This is what I call a serious punch in the chops to those of us who love newspapers and cherish their role in reporting the news to the communities they serve.

Gannett Corp., which owns scores of newspapers around the country — including the one I left in August 2012 at the end of my journalism career — has announced unpaid leaves for its staff of reporters, editors and support staff.

That means, the Amarillo Globe-News in Texas — the paper to which I referred — will be left with even fewer people to cover a region afflicted by the coronavirus pandemic.

GateHouse Media bought the Globe-News in 2018, then purchased Gannett this past year. Gannett’s name, though, remains the one in force. So it fell to Gannett Corp. to announce the furloughs.

The Globe-News reporting and editing staff has been decimated already by the changing media climate. Now comes this news, about the pandemic, and the newspaper’s reporting capabilities have been reduced even further — if that is even possible.

The newspaper company announced the furloughs this way: Gannett advised in a memo to staff … that it will be instituting furloughs and other cost reductions in response to big advertising declines.

Those “big declines” have occurred because businesses that advertise with the newspapers have been shuttered by the pandemic. Since they can’t stay open, they can’t earn revenue, some of which they spend on advertising with newspapers and other media.

The victims of this terrible turn of events aren’t just the businesses, or the media outlets that deliver their message through paid ads. They include rank-and-file Americans like you and me who depend on newspapers to tell us what is going on in our communities. We need to know what’s going on; we need to understand how the pandemic is affecting life in our surroundings.

Oh, sure, we can turn on the TV, boot up our computers, activate our smart phones and all of that. I happen to be rather old school. I also depend on the printed word that is tossed onto my driveway before the sun comes up.

I am unclear how the regional editors of the Amarillo Globe-News will be able to cover the news of their community. For that matter, I’ve wondered how they do it for some time, given the precipitous decline in personnel on hand to report on and deliver the news to the region.

Read about the announcement here.

This “news” saddens me way beyond measure. Gannett says the austerity moves are “temporary.” I want to believe it. That rumbling in my gut tells me something quite different.