John Kelly works for a guy who seems genetically incapable of speaking with moral certitude and clarity.

When the president speaks about slain soldiers “knowing what they were getting into … but I guess it still hurts,” he comes off sounding like a heartless buffoon.

When the White House chief of staff offers the same explanation over what his “best friend” told him after his son was killed in Afghanistan, he sounds dignified, heartfelt and sincere.

Donald J. Trump has opened the door yet again to a pointless and needless controversy. This time it centers on how the president sought to console a grieving widow whose husband died in a firefight in Niger several days ago.

The president might have been motivated to do the right thing. Perhaps he intended to sound compassionate. My reading of what’s been reported about what he told Myeshia Johnson, whose husband Sgt. La David Johnson, died in Niger, tells me the president just isn’t good at fulfilling that role.

And yet, Gen. Kelly manages to sound the right tone, despite his criticism of Rep. Frederica Wilson, who reported the content of the president’s phone conversation with Mrs. Johnson. 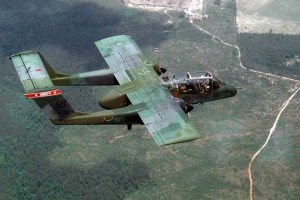 My body isn’t aching. I’ve got most of my marbles. My memory’s still pretty keen.

I just read a headline about “antique” weapons of war being used against the Islamic State.

The picture attached to the story is of an OV-10 Bronco, a twin-engine airplane used during the Vietnam War.

I remember the Bronco. I saw them take off almost hourly from an airfield in a place called Marble Mountain, just a few miles south of Da Nang.

I was assigned to an Army aviation battalion on the western side of the airfield. The OV-10s were piloted by Marines assigned on the other side of the strip. The Marines were stationed with a group called MAG 16, which is shorthand for the 16th Marine Air Group. They flew Broncos, Cobras, Hueys and the Marines’ version of Chinook twin-rotor helicopters.

OK, so I didn’t work on the Broncos, which look vaguely like the old P-38s of World War II; both planes had the twin-fuselage design.

They were effective weapons back then. I guess they’re doing the job now against the Islamic State.

According to the Daily Beast, the Broncos’ mission is somewhat hush-hush. They’ve been used to test updated equipment installed on the birds.

I recall the Broncos being fairly fast and agile aircraft. They would provide firepower to aid ground troops working in the I Corps region of South Vietnam. Today, they’re being used in a similar capacity against Islamic State terrorist fighters.

As the Daily Beast reports: “There are plenty of clues as to what exactly the Broncos were doing. For one, the Pentagon’s reluctance to provide many details about the OV-10s’ overseas missions implies that the planes were working in close conjunction with Special Operations Forces. In all likelihood, the tiny attackers acted as a kind of quick-reacting 9-1-1 force for special operators, taking off quickly at the commandos’ request and flying low to hit elusive militants with guns and rockets, all before the fleet-flooted jihadis could slip away.”

It’s interesting — and somewhat gratifying — to me that tried-and-tested equipment still has its place in this new world of high-tech warfare.

However, to call them “antique” makes those of us who watched these birds fly in their prime feel, well, a bit older than our years.

I can do without the reminder.

I’ve been struggling with this story since I first heard about a couple of days ago.

The Pentagon is going to exhume the unidentified remains of more than 400 sailors and Marines who died on Dec. 7, 1941 aboard the USS Oklahoma, one of several warships sunk in the sneak attack that brought the United States into World War II.

I cannot decide if it’s totally necessary to use DNA technology that’s now available to identify the remains that have been resting in peace in “unknown” graves since “the date which will live in infamy.”

Their remains were reburied in a Honolulu national cemetery in 1950. Some of the remains reportedly were “co-mingled” with others’ remains. So it’s not clear who’s buried in each of the graves.

I understand that the technology now available will allow — through painstaking work — forensics experts to identify the remains. It will take time, perhaps years, to finish the job. Indeed, the family members deserve some closure and identifying the remains will give it to them.

However, the family members of the 429 sailors and Marines who were lost have known they were lost aboard the Oklahoma when it capsized at its mooring after being hit by enemy bombs and torpedoes.

Does it do any good now to exhume those remains and subject them to meticulous DNA research?

Why not simply let those heroes rest in peace?

I’m open to comments on this one. Your thoughts? Please?