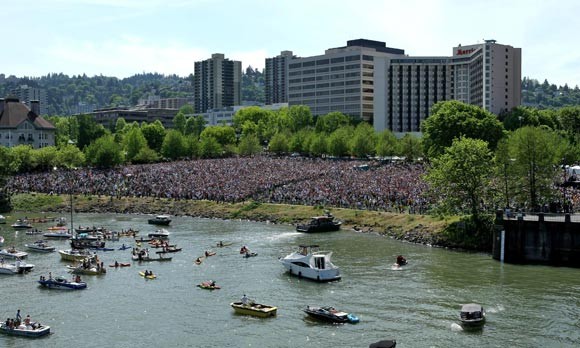 Does this picture look depressing to you?
I didn’t think so. It’s my hometown of Portland, Ore., which has been declared the Unhappiest City in America by BusinessWeek magazine. Why, I never.
But at one level, I kind of get it.
It’s the rain.
I left Portland for Texas 25 years ago. I’ll admit to being “depressed” by the rain. BusinessWeek notes that Portland averages 222 cloudy days annually. Those clouds often produce rain, or drizzle, to be more accurate. I’ve been saying during my entire time in Texas that it rains for four days in Portland before you even notice it. Once you do, then it just exacerbates your depression — once you’ve identified its cause. I actually used to complain to my dad about the rain. His answer? “Talk to God.”
But it’s really quite a beautiful city. Mount Hood looms 55 miles to the east. The West Hills serve as a forested barrier on the other side of the Willamette River. They have rehabilitated several old neighborhoods. The city contains the largest stand of virgin forest of any community in the country. Portland has the most efficient mass transit system in the nation. And the city’s downtown district is a thing of beauty. It’s an urban model that other communities need to emulate; pay attention here, Amarillo’s civic and political leadership.
The BusinessWeek list has plenty of the usual suspects: Detroit, Cleveland, Las Vegas (yeah, losing all that dough at the slots can depress the most ebullient personality) and New Orleans (Hurricane Katrina — need I say more?).
But clearly the most depressing city I’ve ever seen is in Texas. Have you been to Port Arthur? I call it Beirut on the Bayou. Sure, it is full of great people. But the city fathers have given up on downtown revitalization — and it shows.
Perhaps the editors of BusinessWeek placed too much of their depression quotient on the weather that shrouds Portland so many days of the year. Yeah, it sucks. But the folks there have recognized it and created a lively place to live, work and play.
And if that’s the case, Amarillo — with its 330 or so days of sunshine annually — ought to be declared America’s cheeriest place. But I think most of us right about now want some rain, and lots of it!
Tweet
Tweet 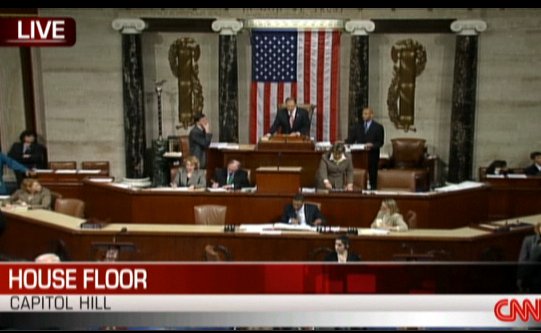 I like the idea being kicked around about televising Texas legislative proceedings.
Will it be a ratings hit? Probably not. The Amarillo City Commission and the Randall County Commissioners Court broadcast their meetings on public access TV. I do not believe the public waits with bated breath to see how our elected officials conduct the public’s business.
But this is a useful tool to improve transparency in state government, as it has helped to some degree at the federal level. C-SPAN broadcasts House and Senate proceedings. No, they aren’t huge ratings hits, either, except when either body gets embroiled in controversial debates.
The most useful role C-SPAN plays on Capitol Hill is showing how lawmakers pontificate to an empty chamber during those interminable “special order” speeches.
It adds, uh, context — don’t you think?
Tweet
Tweet

I’ve been called out, so I’ll take the bait.

A reader of this blog said he “gets it,” and that Rush Limbaugh’s commentary makes me “want to puke.” Well, that’s a little over the top. Limbaugh doesn’t make me sick to my stomach. It does, however, sadden me when his fellow Republicans genuflect before a guy who’s only credential is that he is an entertainer with a bucketload of opinions.

The reader says I’ve never been “specific” about my criticism of Limbaugh. He’s right. That’s because Limbaugh doesn’t articulate policy. He is critical of the “other side” on purely partisan grounds. If Democrats are for something, he’s against it. He calls himself a “conservative,” but I don’t know how he defines his conservatism. Is he a “social conservative” in the mold of, say, James Dobson? Is he a “fiscal conservative” like Newt Gingrich? Is he a less-government conservative who follows the doctrine of Barry Goldwater?

The reader wonders if I am afflicted by “professional envy.” Ummm, no. I’m not glib enough. I’m glad for his success. Limbaugh has developed a following of Dittoheads — a term which, if you think about it, is an insult. But those who hang on his every word are happy with the description. More power to ’em.

My real concern lies with the dismal state of the conservative movement. William Buckley, an absolute genius, is now gone, but the world has other first-class conservative thinkers. George Will comes to mind. Gingrich has a wealth of ideas — and he can be a forceful advocate for them. William Kristol is an articulate advocate for the conservative cause. Those are just three. They argue their cause with civility. I don’t believe thoughtful conservatives wish “failure” on the president of the United States.

Limbaugh’s talent? He’s excellent at finding straw men and then beating the stuffing out of them.

But he’s now the voice of the conservative movement in this country. Sen. Goldwater — God bless his soul — is spinning in his grave.

What has become of the conservative movement?
It is relying on the wisdom of a radio talk show host/comedian for leadership. This is the movement of great ideas put forward by the likes of Ronald Reagan, Barry Goldwater, Newt Gingrich. The Conservative Political Action Conference had its convention this past week and the keynote address came from Rush Limbaugh — the maven of the airwaves and the King of Talk Radio in the Texas Panhandle, among many other regions across the breadth of the nation.
I cannot grasp the decline of a movement that used to produce big thinkers to battle with the liberals’ big thinkers.
My head is spinning and wondering where our political discourse is heading. I just pray it’s not heading into the toilet, right along with our retirement accounts.
Tweet