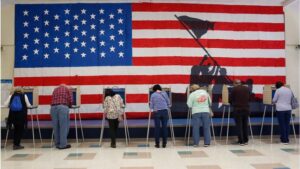 Ted Cruz says that efforts to allow more people to vote, to expand the voter base, is a “power grab.”

Hmm. Let’s parse that one for a moment, eh?

The Texas Republican U.S. senator was taken to task today by a letter writer whose missive was published in the Dallas Morning News. Richard Kidd of Dallas writes, “The only power grab is a party with minority support trying to hold on to power by disenfranchising as many people as possible … The right to vote is a pillar of a democracy and Cruz took an oath to support and defend the Constitution. Congress has a duty to ensure as many citizens as possible have a right to vote and be represented.”

I get his drift. I trust you do, too.

A mantra I beat into the ground over many years as a full-time journalist was that a representative democracy works best when we spread the power out among more, not fewer, voters. That is one argument I sought to make in different ways for greater voter turnout at election time.

It also lies at the heart, I only can presume, at efforts to expand availability to as many voters as human possible.

At its base, increased voter participation shouldn’t ever become a partisan battle. It has become that, however. Republicans are seeking to restrict voter access to ethnic and racial minorities who tend to vote, um, for Democrats. The GOP just can’t have that happen, right? So in states such as Texas, Republican legislators are pushing for rules that make it more difficult for minorities to get registered and to actually vote.

The result will be to invest more power in fewer Americans. It will place more power in the hands of the few and the proud. It also, in my view, runs directly counter to the argument I have been yammering about since The Flood, which is that democracy works better when we spread the power among greater numbers of voters.

So, for Ted Cruz to lament a phony “power grab” while objecting to increasing voter access only reveals how cheaply he values our democratic process.