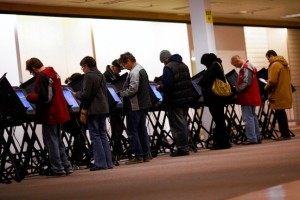 We went to the polling place tonight.

We arrived at the place where we usually vote. The parking lot at Arden Road Baptist Church was full. We walked through the door and turned left down the hall, walking past a long, long line of Randall County residents.

We made another turn down another hall and took our place at the end of the line.

It took five minutes past an hour before we cast our ballots.

I remain committed to voting on Election Day. I remain equally committed to the manner we do it in Texas. We have this open primary system. We all stand in the same line. We inch our way to the room with the voting booths. We declare which party we want to vote in. We cast our ballots. Then we leave.

We don’t register with political parties. We make our choice on Election Day — or least we declare our choice when we reach the end of the line.

There’s a certain pageantry to standing in long lines with other citizens seeking to exercise their rights as Americans. We chatted among ourselves, careful of course not to talk about partisan preferences. We joked with election judges who came out to remind us of the need to have our photo ID and voter registration cards handy.

Some states — such as my home state of Oregon — do all their voting by mail. That’s fine, too, I guess. It boosts turnout, which is the best outcome of that process.

However, I remain an old-fashioned kind of guy. There just remains a certain semblance of ceremony attached to going to the polling place, waiting in line, chatting up your neighbors and then doing your civic duty.

I love the process. 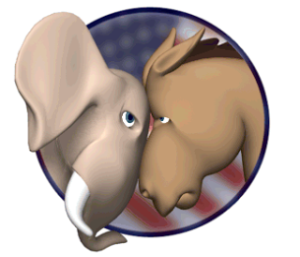 The Four Horsemen of the Texas Panhandle legislative delegation are keeping their political powder dry.

According to the Texas Tribune, none of the four has endorsed any of the seven remaining candidates for president of the United States.

Silly me. I said “seven,” even though only the five Republicans still standing are what matters, given this region’s heavy GOP bent.

State Sen. Kel Seliger of Amarillo is neutral, as are state Reps. Four Price and John Smithee of Amarillo, and state Rep. Ken King of Canadian.

It’s an interesting twist to see so many legislators lining up for candidates in both party primaries.

I’ve been of two minds on whether elected officials should make endorsements in party primaries. If they remain neutral, then they can say they “support” the winner without having to demonstrate it. There won’t be any hell to pay if they back the “wrong” candidate. Their vote, of course, remains a secret and if they don’t want to disclose who gets their vote, they aren’t obligated to tattle on themselves.

Then again, why not lead? Why not show us your allegiance to give us a clue as to how you believe the country should be run, in what direction it should travel?

I, of course, fully endorse the secret balloting that’s one of the hallmarks of our representative democracy.

If they don’t want to tell us who they support, that’s their business. 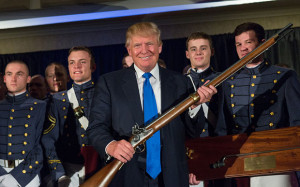 A Texas Panhandle political leader and I were having lunch today at an Amarillo restaurant.

We talked about a lot of things: loyal pets, the state of affairs in the county where he works, Amarillo City Hall turmoil related to the interim city manager. Then we talked briefly about the presidential campaign.

My good friend is as loyal a Republican as you’ll find.

I asked him, “Is your party going to nominate Donald Trump as its candidate for president of the United States?”

“It’s not the party” that’ll nominate Trump, if it comes pass, he said.

People are angry, he said. They want things done. Trump needs to do three things, my friend said: secure the border, bolster our military and get rid of Obamacare and send health insurance back to the states.

Fine. I said. Will he get it done?

My friend doesn’t know. But if he does, he said he’d vote for him for a second term as president — presuming, of course, that he gets elected this November. My friend didn’t vote for him in today’s Super Tuesday primary; he didn’t tell me who got his vote, and I didn’t ask him.

My pal believes the nation is on a course to “implode.” He wants something done. Now. Suffice to say I do not share his gloomy vision of the future. I chose not to engage him on that, as we both had to be other places.

As we walked out the door, my friend said, “I’ll tell you this much: Donald Trump doesn’t know what he doesn’t know.”

He meant that Trump has never worked in government. Never been exposed to its inertia, or lack thereof. He doesn’t know what he’s getting into if lightning strikes (that’s my description) and he gets elected.

That could be a curse or a blessing, depending on what you want, my friend indicated.

I came away from my meeting with my pal getting what he meant. My own sense is that Trump’s utter ignorance of government has made itself quite evident with every proclamation and brash promise he’s made.

I sincerely hope we don’t have to pay for his ignorance come next January … and I will hold on to the belief that we won’t. 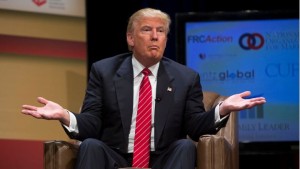 There are times when my mind wanders into seriously weird flights of fancy imagination. This is one of those times.

Take the future of Donald J. Trump’s candidacy for president of the United States.

All the smart money today suggests that Trump’s Republican nomination campaign is going to take big leap forward once they count the ballots in the 12 Super Tuesday primary states.

The likely Democratic nominee figures to be Hillary Rodham Clinton.

We all know that the Clinton political machine is a formidable beast. It is well-funded, well-organized, well-tooled — and well-supplied with opposition research staffers who spend their waking hours digging up dirt on political foes.

Let’s play this out.

Suppose Trump captures the Republican nomination in Cleveland this summer and Clinton walks out of the Philly convention with her party’s nomination.

Then the battle will be joined.

Clinton’s public life has been pretty much an open book for, oh, the past 20-plus years, dating back to her husband’s first campaign for president. Trump’s public life? Not so much.

It figures to be opened gaping wide for all to see and hear.

The Republican Party hierarchy doesn’t trust Trump. They believe he’s a faux Republican. We’ve been exposed in Texas to a devastating 30-second TV ad that contains only Trump’s words in which he declares himself to be pro-choice on abortion, that he considers himself to be a Democrat, in favor of universal health care and in which he thinks Hillary Clinton is just a fantastic person.

On top of that, you need to watch a brilliant comedic put-down of Trump by John Oliver.

And this kind of thing marks only the beginning of the evisceration that Trump will face if he secures the GOP presidential nomination.

I cannot shake this very strange feeling that he really and truly doesn’t want to be exposed fully for the fraudulent circus-clown act that he is.

I’m going to wonder aloud now about whether Trump intends to take this fight all the way.

Just suppose this master of political theatrics does the unthinkable. He goes to the convention having taken all the battering that his so-called fellow Republicans have delivered.

Then he decides, “You know what? I don’t need this. I’m really wealthy. I have several beautiful homes. A gorgeous wife. I have all the creature comforts. I think I’ll just declare that I’m out. I’ll release my delegates. Maybe I’ll make an endorsement. And then I’ll go home.”

Wouldn’t it deliver the final blow to the GOP brass that has sought to take him down? He could toss the convention into utter chaos and leave it to that very same brass to figure out how to nominate a candidate. He could stick it straight into the party’s gut.

I cannot predict whether he’ll accrue enough delegates prior to the convention to secure the nomination. I also am not going to predict that the scenario I’ve just described actually will take place.

However, given the incredible twists, turns and gyrations this campaign that taken to date, nothing — not a single, solitary thing — would surprise me. 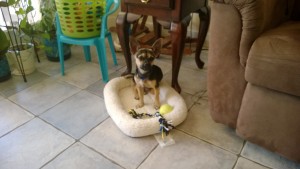 I’ll be brief with this post. It’s getting late and we’ve had a bad day.

I told you about how Mittens our kitty seemed to know intuitively that her brother, Socks, was no longer with us when he died suddenly in November 2014. She became even more lovable than she was, showering us with affection in a way that Socks used to do.

Tonight, we’re getting the same vibe from Toby the Puppy. We said goodbye to Mittens this afternoon. We took her to the veterinarian’s office when the carcinoma in her cheek made her unable to eat. She was willing to eat, but she just couldn’t chew her food. The infection became too intolerable for her.

She died peacefully. Mittens was 14 years of age.

We came home and moped around the house.

So did Toby. On a normal evening at home, he’d want to play fetch with whatever toy he had laying around the house. Not tonight.

This evening he curled up with us and just looked at us.

Tonight we received a demonstration of what Radar O’Reilly used to say on “M*A*S*H,” which is that “Dogs (and cats) are people, too.”

Man, they know when you’re hurting.