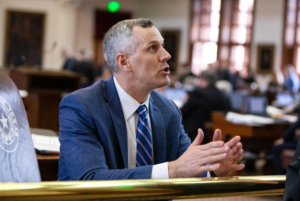 It didn’t take long for Texas state Rep. Matt Schaefer to weigh in on what he said should not occur in the wake of the Odessa slaughter of seven people at the hands of a shooter.

The Tyler Republican said the state should not enact red flag rules, or ban high-capacity magazines or the sale or possession of AR-15 or AK-47 rifles, weapons of war designed to kill a maximum number of people in as little time as possible.

I believe he is dead wrong. I also believe there are legislative remedies available to state legislatures and to Congress that can place additional restrictions on the purchase of these weapons without infringing on the U.S. Constitution’s Second Amendment.

The shooter opened fire when a police officer pulled him over on a traffic stop. He then went on a rampage through Odessa before police killed him in a fire fight after stopping him outside of a movie theater.

Schaefer launched a Twitter thread that has gotten a good bit of resistance from Texas and around the nation. One of his entries included this: I say NO to “red flag” pre-crime laws. NO to universal background checks. NO to bans on AR-15s, or high capacity magazines. NO to mandatory gun buybacks.

Well, we know where he stands.

He added this item on the thread: YES to supporting our public schools. YES to giving every law-abiding single mom the right to carry a handgun to protect her and her kids without permission from the state, and the same for all other law-abiding Texans of age.

This is the second mass slaughter in Texas in the past few weeks. I do not feel one bit safer now knowing that Texans can pack heat, giving them the opportunity to “prevent” this kind of madness.

Rep. Schaefer, we need to do something. Yes, “Godless hearts” are a problem, as Schaefer said. However, they are only part of the crisis that is enveloping the country.

An Odessa police officer pulled someone over on a traffic stop.

What happened next defies human understanding. The motorist started firing an assault weapon.

Seven people died in the slaughter. The event lasted about an hour. The gunman died when police finally chased him down and shot him to death in a fire fight

My point? There ain’t nothing, not a damn thing , “routine” when a police officer pulls someone over on a traffic stop. I was schooled about that once in Oregon when I wrote a newspaper story and referred to a “routine traffic stop.”

The tragedy in Odessa, Texas, should fill us all with a keener understanding and appreciation of the heroic officers who suit up in police uniforms and go about their duties to “protect and serve” the rest of us. 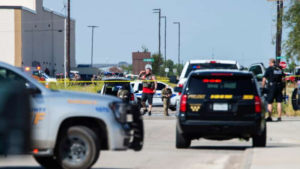 It’s not too much to ask you, Mr. President, when you intend to deliver on that bold inaugural speech pledge you made.

You said “This American carnage stops right here, right now.” Do you remember that? Of course you do! You told us you have the “best brain” in human history.

That gunman went berserk in Odessa, Texas, today, Mr. President. He died apparently in a fire fight with police. Five more innocent victims are dead; 21 more are injured. I don’t know how many of the injured are suffering life-threatening wounds.

I also must bring up yet another declaration you made. You said at the Republican Convention in Cleveland, Ohio, that “I, alone” can cure what ails the nation. I also am sure you remember that, too.

Well, gun violence is a serious national ailment, Mr. President … even though you decline to address the issue directly whenever these massacres occur. And, yes, I consider five fatalities to be a “massacre.”

We had 22 recently in El Paso; nine more died in Dayton, Ohio. Dozens more have died in cities and towns all across the nation. Those deaths have occurred since you took the oath as president and made the “American carnage” declaration from the steps of the U.S. Capitol Building.

I am not going to blame you directly for the deaths, Mr. President. I do, however, want you to use the immense power of your office’s bully pulpit to persuade Congress to act. I want you to state categorically that you will not tolerate gun violence. I want you to speak directly to the national crisis you said you could cure all by yourself.

I am in shock, right along with the rest of the country over what has just happened — yet again! — in West Texas. 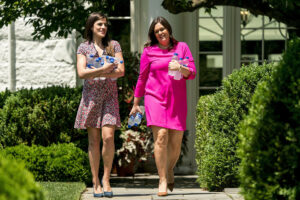 I am having a bit of trouble wrapping my arms around this latest personnel shift within the White House.

Madeleine Westerhout no longer serves as Donald Trump’s personal secretary. Trump fired her allegedly because of remarks she made to reporters that suggested that she gets along better with the president than his own daughters, Ivanka and Tiffany.

What’s more, Westerhout told reporters that the president doesn’t like being photographed with Tiffany because he considers her to be, um, overweight. Tiffany Trump is the daughter the president produced with his second wife, Marla Maples. She keeps a low profile, out of the public eye — unlike, of course, daughter Ivanka.

OK, so Trump canned Westerhout. The president reportedly called Tiffany to assure her he didn’t say what Westerhout said he did. He told reporters that he loves Tiffany.

So, is any of that totally unbelievable? I mean, Trump does have this curiously boorish way of talking about women, even those within his own family. I believe he once said he would “date” Ivanka, but for the fact that, well … she’s his daughter. I don’t know about you, but that kind of remark gives me the creeps.

To be fair, Madeleine Westerhout shouldn’t have said those things to reporters about her boss, the president of the United States. Trump was right to let her go.

However, does anyone out there actually disbelieve the contents of all that she supposedly said? 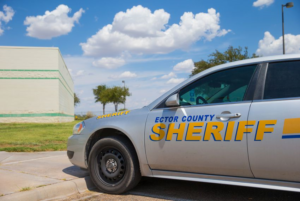 The Midland-Odessa area of West Texas has joined the growing roster of communities plagued by random, insane gun violence.

As I write this brief post, CNN reports that five people are dead. Two shooters opened fire randomly throughout the adjoining cities. One of them reportedly is dead, although the Midland Police Department says there are no “active shooters” on the loose.

Oh, this insanity has gotten way out of hand. It did so long, long ago.

Here is my question of the moment: Given that Texas is supposed to be a haven for law-abiding, gun-toting citizens with state-approved licenses to carry firearms under their jackets and in the open, why didn’t someone open fire on the shooter and stop the individual before all that mayhem occurred?

This is the argument we keep hearing from the gun lobby and others who contend that more guns “in the hands of good guys” make us safer. They’re supposed to protect us against these random monsters who keep slithering out from under the rocks to start shooting innocent victims.

Well, I guess we can have that discussion another time.

At this moment I am wondering yet again what in the world is happening to us, to our nation, to our civilization.

The nation is in shock … yet again.