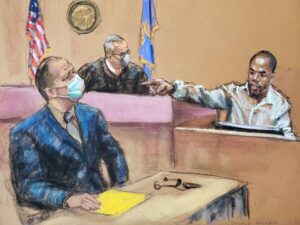 I try not to let my fear consume me, but I do have a particular fear about how this trial under way in Minneapolis might play out.

A former police officer, Derek Chauvin, is on trial in the death of George Floyd, whose life was snuffed out when Chauvin pressed his knee on the back of Floyd’s neck for more than nine minutes.

The prosecution is about to wrap up its case against Chauvin, who is charged with second-degree manslaughter and third-degree murder.

My fear? It’s that the defense is going to persuade one juror that there is “reasonable doubt” that Chauvin’s actions resulted in Floyd’s death.

I haven’t heard every single word of the testimony so far, but I remain convinced that Chauvin’s brutal restraint tactic resulted in the death of a man as he was being arrested — for passing a counterfeit $20 bill. Talk about the punishment not fitting the crime.

I am sitting far away from the trial. I fear what the reaction might be if jurors cannot reach a unanimous verdict that Chauvin is guilty of murdering George Floyd.