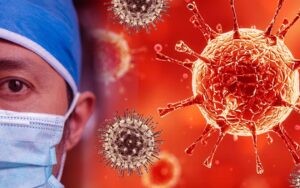 This must be said: The killer coronavirus isn’t the only disease that needs Americans’ attention.

We need to focus to a certain extent on what I consider to be the “other contagion” sweeping through the nation. That is the political battle that just won’t subside over the preventative measures we must take.

This needless and frankly stupid fight had its beginning during the final full year of Donald Trump’s term as president. It arose when Trump downplayed the severity of the illness that had sickened us. He hurled racial epithets at the disease, making reference to its alleged origin in China. He told us the virus would disappear when the temperatures rose in the spring and summer of 2020.

Trump poked fun at political foes, such as Joe Biden, who chose to wear a mask. He didn’t speak to us in terms that defined the COVID-19 virus what it turned out to be: a relentless and highly efficient killer.

Those Trumpkins followed their band director’s lead. We have become infected as well by the politics of what for the life of me I cannot grasp should never have devolved to that level.

Trump said he would adopt a “wartime” footing, only to denigrate the scientists who advised him of the dangers that lurked out there. And again, those followers took him seriously.

They, too, have become part of the problem and not the solution.

The political infection of what should be a united national fight is a disgraceful example of pettiness and petulance. It should have no place in a fight that should transcend partisanship.

President Biden calls mask wearing, social distancing and frequent hand washing the “patriotic” thing to do. If we are going to whip this common enemy, we need to push aside the politics that infects us.

One contagion is enough.