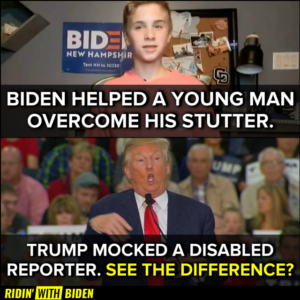 It was a moment during the Democratic National (virtual) Convention that to me spoke volumes about the differences between Joe Biden and Donald Trump.

Biden featured a young man, Brayden Harrington, who had a terrible stuttering problem. The former vice president also conquered a stuttering handicap he had a child. Biden reached out to the youngster, lent him his emotional support and helped him fight off the debilitating handicap.

On Thursday, the youngster appeared in a brief video that meant to call attention to the empathy and compassion that is part of Joe Biden’s makeup, part of what drives him daily. “About a  few months ago, I met him in New Hampshire and he told me we are members of the same club. We stutter,” Brayden said, stumbling over his words.

The other picture you see here is taken from a 2016 campaign appearance in which Trump mocked a disability suffered by a New York Times reporter, Serge Kovaleski. He mimicked the reporter in hideous fashion. The social media image has gone viral and it speaks to the ghastly impulse that too often overtakes Trump, who has no discernible empathy or compassion bone in his body.

I thought I would share these thoughts just to remind you of the choice we all get to make this fall as we elect the president of the United States.