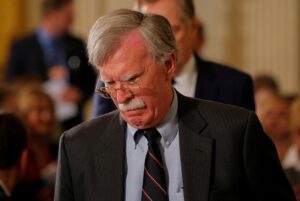 Let’s be clear about John Bolton, who he is and the governing philosophy he represents.

The former national security adviser for Donald John Trump has written a book that shreds the president, peels the bark away from him. “The Room Where it Happened” is a memoir that tells a grim story of Donald Trump’s ignorance, his self-serving approach to government and the corruption that runs rampant through his administration.

Bolton is a hard-liner. He is a dyed-in-the-wool Republican foreign policy operative. He broke with Trump over policy differences, in that Bolton took a tougher stance against Iran, Russia and Syria than Trump.

This is my way of saying that John Bolton is not some squishy liberal “Deep State” operative, meaning that Trump cannot possibly label him as a tool for those who believe Trump poses a threat to that Deep State cabal that seeks to control the world.

All of this makes his contentions in the book all the more remarkable. He says Trump asked China for re-election help; he said the Saudi role in the murder of a Washington Post columnist took attention away from Ivanka Trump, who was facing a firestorm of her own; he acknowledges that Trump sought a political favor from Ukraine in exchange for weapons sent by the United States to help Ukraine fight Russia-backed rebels.

Were this coming from a lefty, Trump might be able to make hay over the source of John Bolton’s criticism. He cannot use that defense. John Bolton instead is a man of high principle who is laying even more bare what we have known all along.

It is that Donald Trump is unfit for the presidency.

One thought on “This Trump critic is no ‘Deep State’ monster”