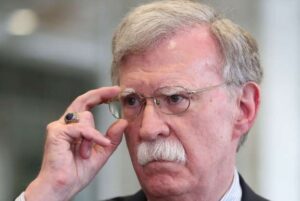 As the saying goes: The hits just keep on comin’.

Former national security adviser John Bolton is about to release the contents of a book he has written in which he details how Donald Trump — in Bolton’s view — committed multiple impeachable acts while dealing with foreign leaders.

Gosh! Who would have thought that could happen?

The White House is suing Bolton in seeking to block publication of his book, “The Room Where it Happened,” contending that Bolton is violating national security matters by publishing classified material. Bolton, to no one’s surprise, denies any such claim from the White House.

I’ve never been a Bolton fan. However, I am even less a fan of Donald Trump. So, when Bolton says that Trump curried favor with China to help him win re-election, or that he held up military aid to Ukraine in exchange for dirt on Joe Biden, well… I tend to believe him.

Bolton’s memoir is an explosive tome that alleges that Trump is ignorant about foreign policy and that Trump governs my impulse and little else.

Bolton dives straight into the heart of the issues that brought about Trump’s impeachment by the House of Representatives, namely the Ukraine matter and Trump seeking a favor from the Ukrainian president: Would he launch an investigation into Joe Biden before the United States would send Ukraine missiles to help fight the Russia-backed rebels fighting against the Ukrainian government?

Of course, in many respects this memoir is a bit anti-climactic. Many of us knew already what Bolton was going to say in the book. Congressional Democrats wanted Bolton to testify during the impeachment inquiry and then in the Senate trial that eventually acquitted Trump. Bolton balked. We didn’t hear from him. Until now.

Then again, it’s not as if Bolton’s testimony during the impeachment inquiry and trial would have changed any minds. It’s doubtful any minds will be changed even now.

I find it ridiculous — and certainly not funny — that Donald Trump would seek to block publication of this memoir on some phony notion of leaking “classified material.” Trump instead appears frightened by the prospect of a once-trusted national security aide exposing him for what many of us know already.

That the president is a dangerous buffoon.

One thought on “Bolton spills more beans on Trump … who knew?”