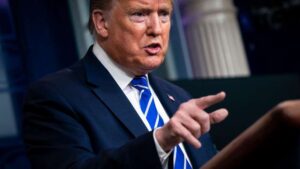 The questions arising from Donald Trump’s remarkable riff the other day about “disinfectants” reportedly has some folks close to the president wondering about the “very stable genius.”

According to the New York Times, Trump’s allies are so rattled by Trump’s musing about whether an ingestion of disinfectants could cure someone of the coronavirus COVID-19 that they persuaded him to remove himself from the daily “briefings” that I now refer to as “rants.”

Or, as the Times reported: Mr. Trump’s typical name-calling can be recast to receptive audiences as mere “counterpunching.” His impeachment was explained away as the dastardly opus of overreaching Democrats. It is more difficult to insist that the man floating disinfectant injection knows what he’s doing.

The ongoing interest in Trump’s bizarre riff has caused Dr. Deborah Birx, one of Trump’s medical experts charged with responding to the pandemic, to wonder why the disinfectant issue is still being discussed. Well, doc, it’s because it came from the mouth of the president of the United States.

The Times also notes that politicians such as President George W. Bush, Vice President Dan Quayle and the presumptive Democratic presidential nominee Joe Biden have at times been prone to gaffes, but Trump is in a league of his own when it comes to misstatements, lies and “stark pronouncements” based on ignorance.

And, yes, it gives many of us reason to wonder if this guy “knows what he’s doing.”