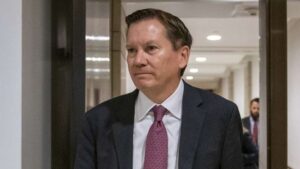 I want to wish U.S. Senate Judiciary Committee Chairman Charles Grassley all the luck he can muster as he tries to get Donald Trump to explain fully why he fired a dedicated inspector general.

Trump canned intelligence community IG Michael Atkinson because he had “lost confidence” in the man who revealed to Congress a complaint that whistleblower brought regarding that “perfect phone call” Trump made to the president of Ukraine.

The report led to Trump’s impeachment in the House of Representatives. Why? Because Trump asked the Ukraine president for a political favor; he wanted dirt on Joe Biden. In return, Trump would release money appropriated by Congress to supply Ukraine with weapons to fight Russia-backed rebels.

Grassley, a Republican, has joined a bipartisan group of senators who want a thorough explanation for Trump’s firing of Atkinson. A loss of “confidence” is insufficient.

The whistleblower law is intended to provide an ability for government officials to report fraud, waste and abuse of power. That was the case here. The whistleblower did what the law allowed … as did Atkinson, the inspector general.

The law requires the president to notify Congress of his decision to fire an IG; the notification must come 30 days prior to the IG’s removal. Trump didn’t do that. He acted impulsively, which according to Grassley is an inappropriate way to handle this matter.

Will the president do as the senators have demanded? He might if he had any appreciation or understanding of the limits of his power. He doesn’t. Which is one of the many reasons why he is unfit to serve in the office he occupies.