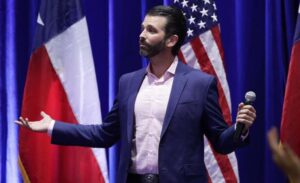 Donald John Trump Jr. long ago became a serious pain in the backside for millions of Americans.

He continues to pop off on behalf of his embattled father, the current president of the United States. He fights and fusses against the media, ripping a page out of Daddy Trump’s playbook.

Now Don Jr. wants to debate Hunter Biden, the son of the Democratic Party’s front runner (yet again) for the 2020 presidential nomination. The Don Jr.-Hunter debate would be — as the younger Trump has proposed — over who between them has profited more from their father’s position.

Don Jr. thinks Hunter Biden has profited more. So he wants to debate him over it.

This is preposterous on its face.

Hunter Biden has become a political sideshow because Republicans — such as the president — want to use his business dealings to undermine the candidacy of his father, the former vice president of the United States.

You know how this has gone. Hunter Biden served on the board of a Ukraine natural gas company. He raked in some serious dough. GOP operatives say he got the gig because his father pulled some strings. Oh, but wait! Ukraine prosecutors have said neither Biden did anything illegal. That hasn’t stopped the GOP smear machine from kicking in.

Now we hear from Don Trump Jr., who wants to interject himself into the fray. For what purpose remains unclear, other than the son is as much in love with himself as Dad is with himself.

One final point. Don Jr. has done not a single thing in his life that is worthy of any sort of honor. Nothing.

One thought on “Grifter in Chief offers a weird challenge”