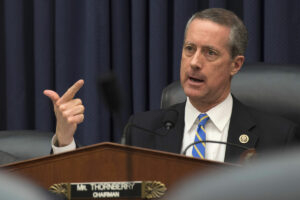 Mac Thornberry is now officially a lame-duck member of Congress, given his announcement today that he won’t seek re-election in 2020 to another term representing the 13th Congressional District of Texas.

I have plenty of issues with Thornberry and his tenure as a member of Congress. However, I feel compelled to defend him on a point for which he was pilloried and pounded over many years since taking office.

Mac Thornberry did not, despite claims to the contrary, ever make a personal pledge to limit the number of terms he would serve in the House of Representatives.

He ran in 1994 for the House under the Contract With America banner waved at the front of the Republican ranks by future Speaker Newt Gingrich. The CWA contained among other items a provision to limit House members to three terms. The idea was to serve six years and then bow out, turning the seat over to new faces, with new ideas.

The term limits provision needs a constitutional amendment. The House has not referred an amendment to the states for their ratification. Thornberry, though, has voted in favor of every proposed amendment whenever it has come to a vote of the full of House.

Thornberry never made a personal pledge. Indeed, he has been elected and re-elected 13 times to the 13th District seat. He ascended to Republican leadership over the course of his tenure, being awarded the chairmanship of the Armed Services Committee.

I just feel the need to defend Thornberry against false accusations that he reneged on his pledge to limit the amount of time he would serve in Congress. Thornberry knew better than to make a pledge he well might be unable or unwilling to keep, such as former Rep. George Nethercutt of Washington state, who defeated the late Tom Foley in that landmark 1994 CWA election. Nethercutt pledged to limit his terms, then changed his mind … and eventually faced the wrath of his constituents for reneging on his promise.

Mac Thornberry doesn’t adhere to my own world view of how government should work. Indeed, I happen to oppose congressional term limits, believing that elections by themselves serve the purpose of limiting the terms of congressmen and women who do a bad job. That’s not the point here.

He didn’t deserve the pounding he took from within the 13th Congressional District for allegedly taking back a campaign promise … that he never made.