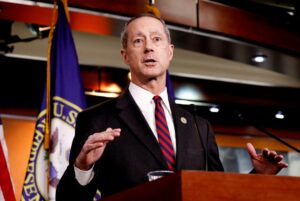 I didn’t exactly call it, but I did wonder out loud about two months ago if U.S. Rep. Mac Thornberry had all the fun he could stand in Congress.

Well, today the Clarendon Republican announced he is bowing out after 25 years in Congress. He’s calling it a career and will not seek re-election next year.

Before our Democratic friends get all lathered up over this news, I need to remind everyone that the 13th Congressional District is as Republican-leaning as any in the country. Donald Trump won the 13th in 2016 with 80 percent of the vote; Thornberry won re-election in 2018 with 82 percent. Thornberry has breezed back into office every two years since 1994 without breaking a sweat.

The 13th isn’t likely to flip from “red” to “blue” just because a Republican officeholder has called it quits.

I cannot begin to know why Thornberry has decided to bail. I have a theory or two that I shall share.

First, he doesn’t like governing from a minority position. Democrats took control of the House in 2018. Nancy Pelosi became speaker for her second tour as the Lady of the House. Meanwhile, Thornberry lost his coveted Armed Services Committee chairmanship as a result. Republican caucus rules also will require Thornberry to step down as ranking member on Armed Services at the end of the current term.

Second, I also wonder if Thornberry is going to get caught up in the sausage grinder that is churning at this moment over whether to impeach Donald Trump. Thornberry more than likely will stand behind, beside and with the president as he fights allegations that he compromised national security by seeking foreign government help in winning re-election in 2020. It won’t cost him much support among rank-and-file voters at home, but he is sure to face plenty of heat were he to vote against impeachment.

Thornberry has been an astute political observer for a long time. He once told before it actually happened that he suspected former House Speaker John Boehner would step aside over the fatigue he was suffering while fighting with the TEA Party element within the House GOP caucus. Boehner did and cited that very thing in his announcement that he was leaving public service.

This is a big deal for the 13th Congressional District. Thornberry becomes the sixth Texas GOP House member to announce his retirement. The others came as a surprise. This one, not so much, as the Texas Tribune has reported.

I’ve known Thornberry pretty well for the past quarter-century. I’ve joked with him over that time that we kind of “grew up together,” given that I started my job in January 1995 at the Amarillo Globe-News the same week he took office as congressman.

I’ve gnashed my teeth at times over some of his decisions. He knows my political leanings. I hope he also knows I have a deep reservoir of respect and affection for him personally.

Mac Thornberry has made a huge decision in the wake of a raucous political climate.