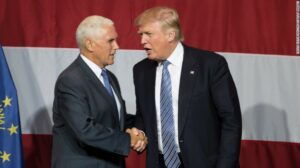 I want to pose a question that many folks will dismiss as wishful thinking nonsense from a fervent anti-Donald Trumpster.

Is it possible that the president of the United States will resign amid all the tumult, tempest and turmoil that is bound to erupt if the U.S. House of Representatives actually impeaches him?

Of course, there is no way to know anything of the sort. Trump “prides” himself on his unpredictability, saying it builds in “flexibility” in his decision-making process, whatever all of that is supposed to mean.

House Democrats are on a forced march toward impeachment, or so we are being led to believe. Speaker Nancy Pelosi has done a one-80, reversing her once-fervent belief that impeachment is a non-starter to launching an impeachment inquiry. The news about Trump’s soliciting help from Ukraine in his re-election effort and his desire to ask the Ukrainians for help in bringing down Joe Biden has accelerated the impeachment rhetoric.

Ohh, brother. Not a good thing.

It’s not that Pence would behave as erratically as Trump. He knows how to act the part of being president, unlike the actual president, who behaves like a cartoon character.

However, Pence’s far-right political leanings — and he has them, compared to Trump’s non-ideology — are anathema to yours truly.

The rest of it is murky, tenuous and dangerous.

Trump’s behavior looks to me to be increasingly erratic, if that is possible. Reports out of Washington suggest he might be starting to panic at the prospect of seeking re-election while being impeached for violating his constitutional oath of office. He is seething over the whistleblower’s report, demanding to know the identity of this individual and implying that the person who blew the whistle should be executed for his or her deeds, which is what the nation used to do “when we were smart” … he said.

If the heat gets any hotter under him, is he capable of standing up to it? I am not at all sure.

Hey, I’m not predicting anything of this sort will occur. I just want to toss it out there because as a blogger it is my prerogative.

Nothing this man does should surprise anyone. Ever!