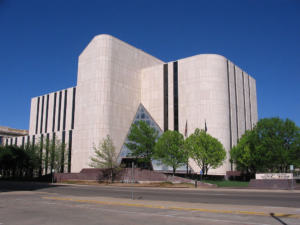 Arthur Ware, the former Potter County judge, has a great name for the building shown here. He once told me he has referred to it as “The Grain Elevator.”

Ware hates the building, which serves as the district courts structure for Potter County. Indeed, the structure erected in the early 1980s is a dog, a dump, a heap. The picture shown here doesn’t do it justice.

Walk through the front door and you see poor workmanship. The interior of the structure is not nearly as functional as it should be.

All that said, the Potter County Commissioners Court has voted 4-1 to authorize $54 million in certificates of obligation to build a new courts structure. Commissioner Mercy Murguia was the lone “no” vote; she doesn’t like the cost of the structure and the debt the county will incur by issuing COs.

I don’t have a dog in that fight, but I do believe the county is correct to march forward toward erecting a new structure to house the district courts, the district clerk, the district attorney and the 7th Texas Court of Appeals. Sure, the county could have called for a bond issue election, but it might fail. County Judge Nancy Tanner believes the county is in dire straits with a building that is so poorly constructed.

Judge Tanner has all but invited the public to walk through the building to see for itself why the county needs to replace The Grain Elevator.

I concur with Judge Tanner. Take a look. It’s a dump. The building needs to go.