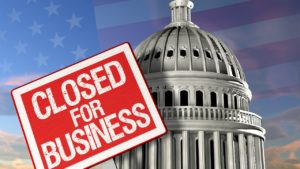 The great British statesman Winston Churchill had it right when he described representative democracy as an inefficient, clumsy and messy form government, but better than any other form that had devised.

We’re witnessing it in its messiest form right now.

Congress and the president are locking horns over spending for a wall along our southern border. Donald Trump wants money to pay for the wall, although he initially promised he would make Mexico pay for it. That won’t happen.

Failure to pay for the wall would result in a partial shutdown of the government at midnight Friday. Merry Christmas, to thousands of federal employees who will not be paid for the time they are being forced to take away from work.

I am just one of those Americans who doesn’t quite understand why we reach this precipice every few months. Why in the world must we subject ourselves to this kind of melodrama? Why do Congress and the White House fail continually to provide long-term budgets that allow them to avoid this kind of brinksmanship?

The president has his constituency. Each member of Congress — 435 House members and 100 senators — answers to his or her own constituencies. They fight. They wrangle. They haggle. They argue. They threaten each other. They toss insults. And all the while the government that is supposed to serve all Americans is being kicked around like some kind of cow chip.

We don’t need to build a wall to secure our southern border. The president doesn’t seem to get that. He wants the wall because he made some idiotic campaign promise. Congressional Democrats want to secure the border through other means.

At last report, the White House indicates that Trump is backing away from the wall. The impasse remains.

Churchill was right about representative democracy. So help me, though, it doesn’t need to be this messy.