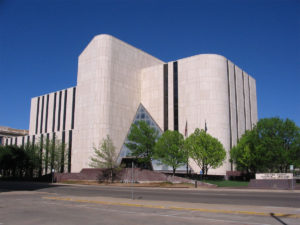 Potter County (Texas) Judge Nancy Tanner is a woman of her word.

She told me a couple of years ago that she intended eventually to move toward the possible construction of a new Criminal Courts Building to replace the monstrosity across the street from the old courthouse in downtown Amarillo.

It appears that the initiative is taking a baby step toward that direction.

The Commissioners Court has approved a $45,000 measure to come up with a conceptual design for a new court building.

Tanner wants to take the county’s move forward one step at a time. It recently completed the relocation of the sheriff’s office, vacating a long-standing structure downtown.

I don’t want to be too harsh, but that structure is a piece of crap. I haven’t seen it in quite some time, but the last time I walked inside, I was struck by the damage to the front of the building. It is terribly crafted. The workmanship on it is abominable.

Whenever I see that building I think of how Tanner’s predecessor as county judge, Arthur Ware, has described it.

Ware calls it “The Grain Elevator.” He hates the Courts Building, which was erected about a decade before Ware took office as county judge.

I concur with the old Marine.

The county needs to vacate the Grain Elevator.