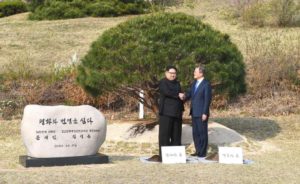 I awoke this morning to an absolute stunner of an announcement.

Kim Jong Un and Moon Jae-in — the presidents of North and South Korea, respectively — have agreed to actually end the Korean War.

End the war? Yes. The Korean War never officially ended with a peace treaty. They stopped the shooting in 1953 after an armistice was signed, ending three years of bloody conflict on the Korean Peninsula.

The Koreas has been functioning with a cease-fire in place. The Demilitarized Zone separating the countries is nothing of the kind: it is the most militarized piece of real estate on Earth.

So, where do we go from here?

Kim and Moon signed an agreement to end the war. The treaty signing will occur later this year, according to the document the men signed.

But there’s more. There now appears some serious movement toward discussions relating to the denuclearization of the peninsula. That’s right. Kim Jong Un has agreed, apparently, to enter serious talks to take down his country’s nuclear ambitions.

Now for a big question: Who gets the credit for this seemingly monumental event? I have a strong hunch that the president of the United States, Donald J. Trump, is going to claim all the credit for himself. He is likely to tell us his tough talk regarding “Little Rocket Man” has brought Kim to his senses.

Well, the president deserves some credit. He needs to share it with the People’s Republic of China, which quite likely also has persuaded Kim to end this ongoing conflict. North Korea has precisely one dependable ally on Earth. It is the PRC. Does anyone believe that Kim would do anything so significant without China signing off?

I am stunned today to hear the news that came out of Korea.

Let us all say a prayer that Kim Jong Un — who is as mercurial and unpredictable as Donald Trump — remains faithful to the signature he has affixed on a document pledging to end the Korean War.

Sixty-five years after the end of the bloodshed, it’s about time!