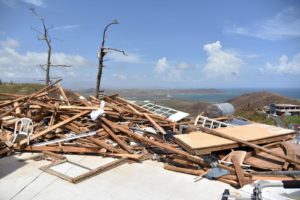 Donald J. Trump is going to have to live with a profoundly unfair epithet he hurled at the national news media, which continue to perform the duty their members all signed on to do.

Which is to report the news, to tell the public about their world — the good news and the bad. The media are not, as Trump infamously declared, “the enemy of the American people.”

Let’s look for a moment at the job the media are doing in telling us about Hurricane Maria’s tragic aftermath.

The media have flown into Puerto Rico and the Virgin Islands. They have encountered virtually impossible working conditions, starting with the total loss of electricity to power the equipment they need to report to the world about the suffering that’s occurring in those two U.S. territories.

They have told the stories of our fellow Americans having to cope with the destruction brought to them by Maria. They have in some cases put themselves in harm’s way. They have exposed themselves to the same elements that are plaguing the citizens of Puerto Rico and Virgin Islands.

The president of the United States continues to chide the media — in his own mind — for failing to tell the world about the “fantastic” job the federal government is doing to deliver aid and comfort to those stricken by the storm.

Get off it, Mr. President! The media have done their job. Just as they always do their job. That the media don’t tell the story precisely to the president’s liking by reporting news that doesn’t cast him in the most positive light possible should not reflect badly on the job the media are doing.

Without the media, the rest of the nation would not know about the struggles, the misery and the heroism being exhibited daily as Puerto Rico and the Virgin Islands seek to regain their footing.

Keep up the great work, my former colleagues. As for the president, he needs to focus — for once — solely on his job, which is to ensure that our government rescues our fellow citizens from their suffering.