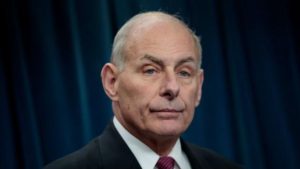 It’s been a bad week for Donald John Trump.

His effort to repeal the Affordable Care Act collapsed; an Alabama special Republican primary election nominated someone other than the guy Trump endorsed; the government’s response to Hurricane Maria’s wrath has been called into serious question; then the health and human services secretary “resigned” over a growing controversy involving his expensive travel habits.

Caught in the midst of this maelstrom is White House chief of staff John Kelly. I want to discuss briefly Kelly’s impact on the final element of Trump’s bad week, the ouster of HHS Secretary Tom Price.

Kelly has instituted some new rules regarding official travel of Cabinet officials and senior administration staffers. So, the retired Marine general is making his presence felt once again.

Kelly is one Trump appointment who’s had a net positive impact on the administration. I am glad to see him at his new post and hope he can continue to build some semblance of order in a seriously dysfunctional White House.

They will need approval from the chief of staff, according to Budget Director Mick Mulvaney. I am willing to bet the farm that Kelly insisted on gaining that approval. Price had abused his position by spending hundreds of thousands of dollars of public money in expensive charter air travel.

Gen. Kelly has made his mark. He’ll keep making his mark as long as the president will allow him. He won’t eclipse the president, whose ego won’t allow it. The question that keeps cropping up in my own mind is whether Trump will entrust him to do his job.