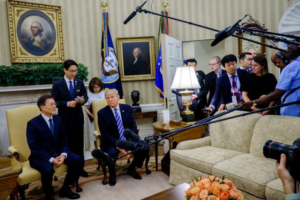 I must have missed something.

South Korea has been arguably our staunchest ally in East Asia since, oh, the Korean War of 1950-53. We fought side by side with the South Koreans against North Korea and later, the People’s Republic of China.

Now the North has nuclear bombs. It is threatening to use them against South Korea. The United States is supposed to stand ready to defend the South against the North.

So, why is Donald J. Trump browbeating South Korea into doing more to deter North Korea from threatening to toss the rest of the world into a nuclear war?

South Korean leaders say they want to “talk” with their neighbors in the North. The U.S. president is having none of it. He has taken to Twitter to suggest that South Korea is run by a government of “appeasers.”

Appeasers? Are you kidding me?

Uh, Mr. President, these guys are on our side. They’ve got more to lose in a military confrontation with North Korea than anyone.

South Korean President Moon Jae-in got elected this year promising to “talk” to North Korea. He fired back at Trump, saying that South Korea “cannot tolerate another catastrophic war on this peninsula.”

Why in the world cannot the president of the United States treat the South Koreans like the valuable ally they’ve been — and need to continue to be as we try to work our way through this crisis with the North?

Talk of “appeasers” and threats to cut off trade won’t do the job.