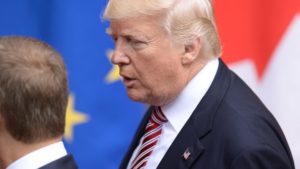 This item almost doesn’t deserve comment. Aww, but what the heck.

It’s become normal, I guess, for the president to do this kind of thing. Do as I say, not as I do.

* He blasts Michelle Obama for not covering her head while touring a Muslim country, only to have his wife do the same thing during his recent journey to Saudi Arabia.

* He rips into Barack Obama for all that golf he played as president, then hits the links with reckless abandon when he takes office.

* Trump leads rally crowd chants of “lock her up!” for her use of private e-mail account while serving as secretary of state, then he blabs to Russians about classified security information.

The president retweeted a Fox News report that cites an anonymous source relating to his son-in-law’s current difficulty with “the Russia thing.” He did so just days after tweeting a rant equating anonymous sources to “fake news.”

Here’s a suggestion for the president: Take a breath and be sure about what you’ve put into the public domain before firing off another of those nonsensical tweets.