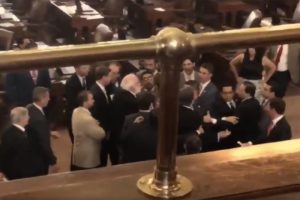 The headline on the Texas Tribune story says plenty about the way the Texas Legislature ended its regular session.

It concluded with two legislators, both men — a Democrat and a Republican — threatening to harm each other. A disturbance broke out on the floor of the Texas House of Representatives.

The Tribune article, written by Ross Ramsey, posits an interesting notion. As I look the article over, Ramsey seems to suggest that we need more women in the Texas Legislature.

“About one in five Texas lawmakers is female. Over the state’s history, 2.8 percent of the 5,571 people who’ve served in the Legislature have been women. The 155 women who’ve served wouldn’t be enough — if they were all alive and in office today — to fill all 181 seats in the House and the Senate.”

He goes on to note that none of the women currently serving in the House took part in the melee at the end of the session. Ramsey adds: “If you know any of them, you know that’s not because they were afraid.”

I once took note of the time in 2015 when Amarillo voters booted two women off the City Council, electing an all-male governing body. I lamented at the time the absence of any female perspective on the council. This year, voters reversed themselves in a big way, electing three women to the five-member council, creating a female council majority for the first time in Amarillo history.

It’s not that City Hall has seen the kind of nonsense that erupted at the State Capitol. It’s merely that I consider female voices on the council to be a good thing.

I’m now thinking that we might need more women in the halls of the Texas Legislature to bring some measure of calm to state government.