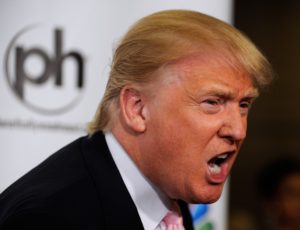 Please pardon this bad rip-off of a famous poem, but … How many time have I been wrong about this election cycle? Let me count the ways.

Elizabeth Barrett Browning wouldn’t approve, but what the heck. I feel the need to atone for some terrible misfires on this presidential election campaign.

I take small solace — and it is small, indeed — in the knowledge that I am not alone in failing to shoot straight.

Donald J. Trump has confounded damn near everyone, first by grabbing the Republican presidential nomination this summer and then by making a race of it against Democratic nominee Hillary Rodham Clinton.

I once vowed to never again make a political prediction. I should have kept to my pledge. I should have buttoned up my pie hole/typing fingers and called it good. Let others stick their necks out.

I never thought Trump would be nominated. I never thought this novice politician with the very big mouth and even larger ego could wrestle the nomination away from the Republican pros.

With that track record, I still managed to stick my neck out on this campaign.

Once Trump got the nomination, I was dead certain Clinton would win in a landslide. She was destined to be president, kind of like the way Ike was destined in 1952 for the top job … after leading Allied troops to victory in World War II.

I didn’t anticipate Clinton’s flaws being such a drag on her candidacy. Nor did I envision Trump ever being able to get away with some of the hideous things he has said over the past year: John McCain is a war hero only because he “was captured?; the U.S.-born federal judge being a “Mexican”; his mocking of a reporter’s physical ailments; his suggestion that Mexico is sending “rapists, drug dealers, murderers” and other assorted criminals to the United States.

I never anticipated that his GOP base of support would hold as strong as it has done.

Moreover, I was so certain that Trump’s flaws were so egregious that I actually blogged that Hillary could win a 50-state sweep this fall.

Time to handicap the fall election

OK, with all of that out of the way, I am going to make another stab at fulfilling an earlier pledge.

I am — once again — declaring myself to be out of the political predicting game.

I lack the intuitive powers, perhaps even the intellect to try to guess what voters are going to do.

If you catch me falling off the wagon again, you are welcome to call the guys in the white coats. I won’t be silent. There will be more commentary to come. Just no predicting.

I’m just going to wait this spectacle out … and hope for the best.

2 thoughts on “So wrong, so often on this election campaign”