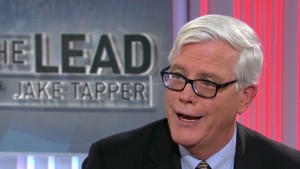 Hewitt is a well-known and high-demand conservative radio host. Trump, well, I’m guessing you know who he is.

An interesting back story may be developing here as Hewitt and Trump duke it out rhetorically. It is that Hewitt is finding new friends and allies — in the liberal media.

Trump’s description of Hewitt as a “third-rate radio announcer” came after Trump fluffed a question from Hewitt over his knowledge of an Iranian terror group leader. Hewitt said he wasn’t asking a “gotcha” question, but Trump said he did exactly that.

Hewitt isn’t a fly-by-night right-wing blowhard. He’s a savvy political analyst. He also is one of the go-to guys among conservative mainstream media talkers.

Now, though, he’s finding allies among those in the other conservative media outlets — those that tilt to the left. They’re taking up for Hewitt and defending him, just as many of them have defended Fox News’s Megyn Kelly in her feud with Trump.

Come to think of it, I’ve been defending them, too.

I’m proud to stand with them.