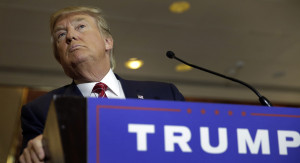 Donald Trump keeps doing and saying things that, in any normal political cycle, would signal the death knell to his presidential campaign.

He went on Hugh Hewitt’s radio talk show. The two of them were talking about this and that. Then Hewitt — a savvy and smart radio commentator — asked Trump if he knew who name of the guy who lead the Qud movement in Iran. Trump said he thought Hewitt said “Kurds.” He didn’t know the name of Qasem Soleimani, the Qud leader.

OK, so then Trump stumbles on the question. He cannot name the terror leader. Then he blasts Hewitt for asking a “gotcha” question.

He  went on MSNBC’s “Morning Joe” the next day and ripped into Hewitt, calling him a “third-rate radio announcer.” For the record, Hewitt is one of the go-to guys in conservative talk radio and is considered a highly credible interviewer; indeed, his show is a favorite for conservative candidates.

What does all this mean? It means Trump (a) needs to study current geopolitical relationships, (b) needs to stop impugning others’ integrity when he cannot answer questions on issues of the day and (c) needs to start assembling at least a modicum of detail to the answers others are seeking as he proclaims his ambition to “make America great again.”

This man cannot possibly be seen as a serious candidate for commander in chief, head of state, head of government and leader of the free world.

Somehow, though, he maintains that front runner status among Republican primary voters.

Which prompts me to ask: Have they lost their ever-lovin’ minds?